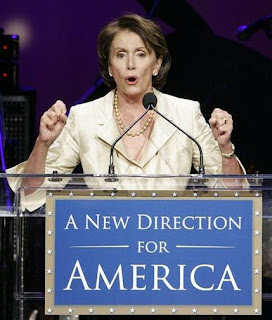 Our Congress, led by Nancy Pelosi and other Democrats, has committed one of its most inexplicable, grossly irresponsible acts ever (and that's saying a lot) by failing to pass much-needed improvements to the Foreign Intelligence Surveillance Act. Therefore, as Senator Mitch McConnell writes in this Investor's Business Daily editorial,

...The House's lack of action meant that at midnight on Feb. 16, the nation's terrorist surveillance law expired. At that moment, intelligence officials who spend their days listening in on phone calls between terrorists overseas were legally barred from following new leads without first following outdated and cumbersome warrant procedures — even if neither caller is calling from within the U.S.

The consequences of inaction are real. Today, if someone in a previously unknown terror cell calls an eager new recruit in London, our agents will have to hang up the phone, apply for a warrant and hope for the best...

The consequences of inaction are real: Last Saturday, the director of national intelligence, Adm. Mike McConnell, warned Congress that we have already lost intelligence information and that "our ability to gather information concerning the intentions and planning of terrorists and other foreign intelligence targets will continue to degrade because we have lost tools provided by the Protect America Act that enable us to adjust to changing circumstances."

Following the lead of Speaker Nancy Pelosi, the leaders of the Democratic Party in the House of Representatives have prevented a vote on bipartisan improvements to the Foreign Intelligence Surveillance Act of 1978 — even though a majority in both chambers of Congress had indicated a willingness to support the updates and even though McConnell had been urging Congress to act on the revisions for nearly a year....

Faced with an urgent warning by the director of national intelligence, House Democrats closed up shop and went home. That decision, according to top intelligence officials, left the U.S. more vulnerable to attack.

Americans have been spared another terrorist attack at home thanks in large part to programs like electronic surveillance. As the House reconvenes this week, it's time for the Democrats' leadership to allow a vote on this vital national security measure.

Here's the entire editorial.
Posted by DH at 8:40 AM