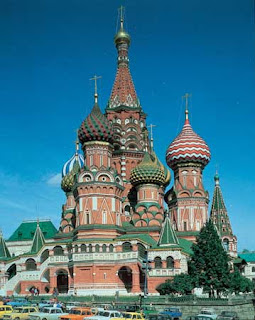 It is sad but true that the government's persecution of certain religious citizens in Russia, Belarus and other countries formerly in the Soviet ring has historically been defended and even assisted by the Russian Orthodox Church.

Of course, some would be quick to say that the current structure of the state church does not represent the true spirit of Orthodoxy. Alexander Solzhenitsyn, for instance, grieved at how the true Church had been killed in the camps of Stalin, replaced by a system that served not the soul of Russia but rather the sinister schemes of her Communist masters.

It is still happening. Here is just one example that has recently come to light.

At the request of a Russian Orthodox bishop, the regional Public Prosecutor's Office, Organised Crime Police, Department for the Affairs of Minors, Education Department and ordinary police in Smolensk have made a series of check-ups on a local Methodist church, Forum 18 News Service has learnt. They also forced the church to remove missionary college plans from its website.

Bishop Ignati (Punin) of Vyazma claimed the college "aims not to bring about the rebirth of the spiritual-moral foundations of the life of our people, but its spiritual destruction." He then asked the Regional Public Prosecutor "to take the measures necessary in this situation to defend the inhabitants of our city, particularly youth, from this pseudo-religious organisation."

Even though the Bishop's appeal contained no legal argument, the Public Prosecutor's Office explained to Forum 18 that it reacted because: "Any citizen or organisation may appeal to us." If a citizen suggests an organisation is harmful, but not in breach of the law, "we'll check the legality of its activity," Forum 18 was told.

Methodist Pastor Aleksandr Vtorov has filed suit for moral damages against Bishop Ignati. Intimidated by the unprecedented wave of check-ups, only five Methodists attended last Sunday's worship service, instead of the usual 36...

..."I may not like Orthodoxy, but I don't send complaints to the Public Prosecutor," Pastor Vtorov remarked to Forum 18. "There should be an anti-monopoly commission for religion, like there is in the economic sphere!"
Posted by DH at 10:25 AM