Doing Nothing Can Kill You: Nancy Pelosi's Foolish Delays on the Protect America Act 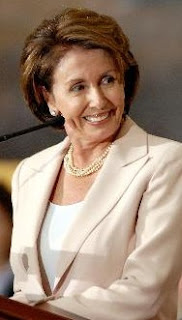 ...On Feb. 14, House Speaker Nancy Pelosi decided to send the members of the House home on vacation instead of having them vote on extending the Protect America Act, a measure that already had passed in the U.S. Senate 68-29. The bill, among other things, provides civil immunity for private companies that assist U.S. intelligence agencies in intercepting terrorist communications to, from or through the United States. With the House adjourned, the PAA expired -- and Americans became instantly more vulnerable.

As might be expected in the midst of a presidential election year, Republicans and administration officials immediately went to the airwaves and print to decry Pelosi's decision. Director of National Intelligence Mike McConnell took the unusual step of appearing on Fox News Channel to point out that termination of the PAA "introduces a level of uncertainty that is going to be very difficult for us."

Now, Senate Intelligence Committee Chairman Jay Rockefeller, D-W.Va., who backed the bill in the Senate, assures us that he's "going to work something out" with his House colleagues, but he refuses to speculate about how long that might take. Meanwhile private-sector telecom executives, wary of legal assaults from shareholders and "public interest" groups, are understandably reluctant to assist U.S. officials in breaking into terrorist communications. Concerns about what we may be missing -- and the immediate risk of a major terrorist attack -- go well beyond Washington politics.

Given the enormous flow of global voice and data communications, any interruption or delay in collecting "signals intelligence" jeopardizes the ability of analysts to determine and disseminate whether, where, how and when a terrorist organization may be planning an attack. That's what happened in the months leading up to 9/11 -- and the kind of vulnerability the PAA was designed to redress. Here's why U.S. and allied defense, security and intelligence officers are so worried about being deaf and blind right now...

The rest of Oliver North's column (an important though infuriating one) is over here.
Posted by DH at 9:56 AM