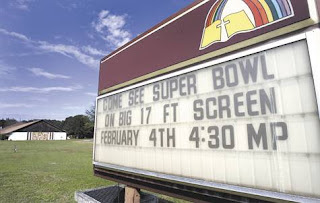 It's been over a year since I posted an item about the NFL's allowance of saloons showing the Super Bowl on large screens while actively prohibiting the same permission to church groups. As I put it then, "Talk about unsportsmanlike conduct!"

So I was pleased to see that a heavy blitz put on by conservative bloggers, talk show hosts, and a couple of politicians pressured NFL Commissioner Roger Goodell into reversing their call.

But, interestingly enough, not until after this year's contest was history. Why the delay?
Posted by DH at 11:04 AM