"Getting Real" About Cuba 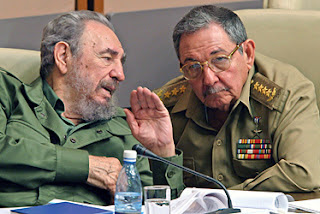 Liberal writer Chris Walker "gets real" about Cuba in this brief but effective article over in the Independent (U.K.) Here's a few excerpts:

I must admit, I greeted the news that Fidel Castro was stepping down with great pleasure. It is amazing how so many of us on the liberal wing of politics have allowed ourselves to be manipulated by his mad regime. It is cruel and oppressive and has reduced his people to misery.

Cuba is a textbook example of how political mismanagement can push entire nations to the breadline. Economic statistics are wrapped up in propaganda. Thus we are told the economy surged 12 per cent last year, and wage growth was 5 per cent. The reality is that average incomes are estimated at $15 (£7.60) a month and the population live close to poverty. More than 50 per cent of housing is unsanitary.

Supposed achievements of Castro's Cuba are cleverly put out for external consumption – mainly the high level of literacy and the very low level of infant mortality. But given the absence of a free press in Cuba, it is hard to be sure that even these achievements are real. Talk of doctors begging tourists for aspirins hardly equates with a thriving health system...

It is worth pausing to quantify the repression. The list of crimes, imprisonments and hardships is a long one, but the number of politically motivated executions is powerful enough in its own right: 30,000.

It is against this background that I get a bit irritated by friends who plan holidays in the "roman- tic, crumbling elegance of old Havana". Western tourists have been cleverly manipulated – their hard currency is now the single biggest factor in Cuba's ramshackle economy. The pursuit of crumbling elegance sounds dangerously like poverty tourism...