Will John McCain "Be No Friend to Conservatives in the White House"? 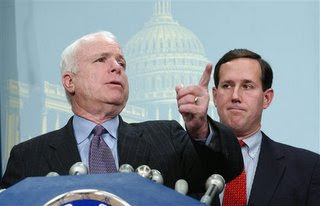 David Limbaugh warns Republicans to take a long, hard look at John McCain's record before making a leap they may well be sorry for.

...It's disappointing to watch good conservatives demean themselves by trying to present McCain as something he's not. No matter how much they spin, they can't fool conservatives familiar with McCain's record. McCain's detractors are not the ones having to stretch and massage the facts in order to turn McCain -- overnight -- into a Reagan conservative.

McCain is not only not conservative enough; he has also has built a reputation as a maverick by stabbing his party in the back -- not in furtherance of conservative principles but by betraying them. McCain delights in sticking it to his colleagues while winning accolades from the mainstream liberal media.

Former senator Rick Santorum, whose conservative credentials are beyond question, said, "I don't agree with (McCain) on hardly any issues." Santorum told radio host Mark Levin, "I just have to tell you, as a leader, as someone who had to put these coalitions together, it was always hard and we very rarely on domestic policy had any help from the senator from Arizona." Santorum said McCain has been damaging to conservative causes and would be no friend to conservatives in the White House...
Posted by DH at 9:54 AM