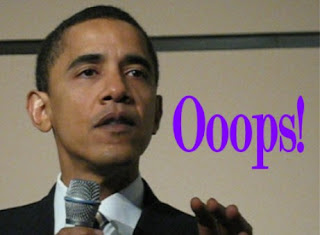 James Taranto, writing in the Wall Street Journal's "Best of the Web" feature, has a rather alarming tidbit about "Butterfingers Barack." Taranto asks...

Is Barack Obama ready to be president? This Los Angeles Times story gives reason for doubt:

Obama angered fellow Democrats in the Illinois Senate when he voted to strip millions of dollars from a child welfare office on Chicago's West Side. But Obama had a ready explanation: He goofed.

"I was not aware that I had voted no," he said that day in June 2002, asking that the record be changed to reflect that he "intended to vote yes."

That was not the only misfire for the former civil rights attorney first elected to the state Senate in 1996. During his eight years in state office, Obama cast more than 4,000 votes. Of those, according to transcripts of the proceedings in Springfield, he hit the wrong button at least six times.

And now he asks America to trust him with the nuclear button?
Posted by DH at 9:17 AM