Why Bother About Studying the Bible or Confronting the Cults? I've Got a Big Church Anyhow! 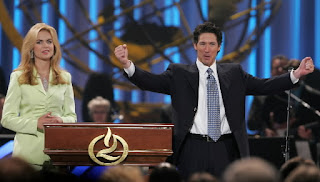 Here's how bad it has become in the comfort-driven, seeker-friendly movement of American evangelicalism...a movement where the basics of biblical doctrine have been traded in for church growth, ambitious egos, religion as entertainment, a cowardly preference for vagueness and naivety over simple Bible study, and a greater desire for the world's approval than of God's.

...Joel Osteen is pastor of Houston's Lakewood Church, which -- according to Outreach Magazine -- hosts approximately 47,000 people each weekend in a renovated former NBA arena. Two days before Christmas, the best-selling author made an appearance on Fox News Sunday with host Chris Wallace, where he was asked about the role of religion in politics. More specifically, Osteen was asked about the Mormon faith, and whether a Mormon could be classified as "a true Christian."

"In my mind they are," Osteen said. "Mitt Romney has said that he believes in Christ as his Savior, and that's what I believe. I'm not the one to judge the little details of [Romney's religion], so I believe [Mormons are Christians] and Mitt Romney seems like a man of character and integrity to me and I don't think anything would stop me from voting for him if that's what I felt like."

When asked about specifics of the Mormon faith, such as the gold tablets allegedly found by Joseph Smith with the so-called "new revelation" from God, and the belief that humans can become gods, Osteen said he did not know enough about the religion's beliefs to comment.

"I certainly can't say that I agree with everything that I've heard about it," the Houston pastor responded. "But from what I've heard from Mitt, when he says that Christ is his Savior, to me that's a common bond."
Posted by DH at 12:36 PM