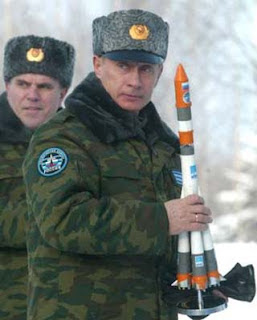 This Ken Fireman article, published over at Bloomberg.com, deals with the disparity between Vladimir Putin's militaristic ambitions and the actual state of the Russian military. For instance, Russia's armed forces continue to be mired down by old equipment, corruption in the officer corps, a lack of unified philosophy, manpower problems, and financing that still lags far behind the West. Indeed, though Putin has managed to substantially increase Russia's defense budget, the amount remains a small fraction of U.S. spending.

Fireman quotes Zoltan Barany, University of Texas in Austin professor and author of several books about Russia, including this year's Democratic Breakdown and the Decline of the Russian Military, "There is this notion in the West that the Russian army is coming back...They're not back. Things have started to change, but there's a long way to go before they're back, and I don't think they will ever be back like they were.''

Very interesting information. Again, here's the link to Fireman's article.
Posted by DH at 9:59 AM