Ron Paul's Libertarianism Must Face Facts About the War on Terror 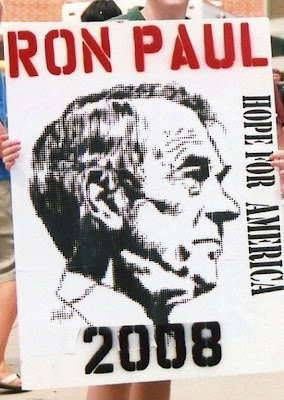 Patrick Ruffini, in commenting on the generally positive spin given Ron Paul in a recent Washington Post article, insists that Paul's libertarianism, if it is to ever have a meaningful future, needs to be distinctly different from the Hollywood variety that has heretofore drawn him such strong support. Read on.

...Some campaigns can win big without ever coming close to winning an actual contest. Pat Robertson’s 1988 campaign signaled that Christian Conservatives had arrived in the GOP. Ron Paul is doing the same for libertarians. This is not a counterweight to the religious right per se, since Paul is identified as pro-life, but it does potentially open up a new army of activists on the right not primarily motivated by social/moral issues.

Not every losing single-issue candidate succeeds like this. Immigration-restrictionists still lack an outlet in the GOP, thanks to Tom Tancredo’s embarrassing tone-deafness as a candidate. Sam Brownback’s campaign had hoped to galvanize single-issue pro-lifers, but was hobbled by his dry persona. Duncan Hunter looks mostly like a campaign for Secretary of Defense.

Assuming Paul loses, where does small-l libertarianism go from here? His movement already did the smart thing by making peace with social conservatism. Libertarianism is no longer aligned with libertine stances on abortion and gay rights.

To become the ascendant ideology within the GOP, I suspect they’ll have to find a way to do the same thing on national security. The war on terror writ large is the one big thing social and economic conservatives agree on, and Ron Paul is vocally aligned against both.

Mainstream Republican libertarians might be gung-ho for Paul’s small-government idealism, they might adopt Glenn Reynoldsish skepticism of the homeland security bureaucracy, and even John McCain has lately made a thing of ripping the military-industrial complex, but there is no way — I repeat NO WAY — they will embrace Ron Paul if he continues to blame America for 9/11 and imply that America is acting illegally in defending itself around the globe. Even if they aren’t the biggest fans of the war, most people that are available for Ron Paul on the right are by temperament patriotic and will never vote for someone who sounds like Noam Chomsky.

As someone who routinely called myself a libertarian prior to 9/11, here’s how I would square the circle: Absolute freedom within our borders, for our own citizens; eternal vigilance and (when necessary) ruthlessness abroad. For libertarian ideals to survive, they must be relentlessly defended against the likes of Islamic extremists...

The key principle is one of reciprocity. If you behave peacefully and embrace the norms of a libertarian society, we leave you alone. If you seek to destroy a free society, we will destroy you.

If they’re serious about defending their ideals and seeing to it that libertarianism survives more than a generation in actual practice, I don’t see any reason why libertarians couldn’t embrace a more conservative positioning on national security.
Posted by DH at 8:30 AM