Just What Kind of Catholic Does Tony Blair Hope To Be? 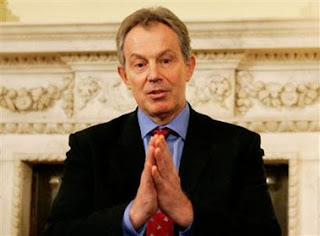 ...In the robustly secular world of Westminster, few care what Mr Blair does with his Sundays. But Mr Blair’s conversion is a hot and divisive topic among priests and ordinary Christians in this country — and even in the Vatican itself. Churchgoers who wrote to their MPs in protest against the former prime minister’s various policy initiatives, from embryo research to laws on homosexual adoption, have good reason to be puzzled. Has Blair recanted? If he has, shouldn’t he say so publicly before he is received? Or has he decided not so much that he will go to Rome, but that Rome will come to him?...

Although Anglican, Mr Blair has always attended Mass with his wife, a convent-educated Catholic. He has done so, he says, to keep the family together on Sunday. He has described himself as an ‘ecumenical Christian’, which appears to mean that he confers on himself the right to attend any service he chooses. In 1996 the late Cardinal Hume wrote asking him to stop taking communion at St Joan of Arc, a Catholic church in Islington. He reluctantly agreed, but wrote in reply, ‘I wonder what Jesus would have made of it.’

He might also have wondered what the Anglican and Catholic martyrs would have made of it. Much as it may baffle Blair, people once died rather than deny — or affirm — Catholic Eucharistic teaching; and few practising Anglicans and Catholics would today dream of gatecrashing each other’s communion queues. Yet Mr Blair had come to his own, very unique conclusions about religion, and felt confident enough to lecture a Cardinal on Eucharistic protocol.

In Downing Street, Mr Blair’s faith was seen as a driving factor in his life — but few saw his beliefs as Catholic. ‘If you look at not just his voting record, but his legislative record, he has fought the Church for years,’ says one senior official who worked for him at No. 10. ‘That is why I cannot see how he can enter the Church now. Converts cannot cherry-pick which parts of the faith they agree with. It’s easier for cradle Catholics to dissent, but converts have to sign up to the whole agenda. Perhaps he has changed his mind. I just don’t know.’

To critics within the Church, Mr Blair was — as one priest puts it — ‘the most anti-Catholic Prime Minister of modern times’. Others, especially Evangelicals, go further and describe his policies as broadly anti-Christian. He has legalised homosexual civil unions and gay adoptions. He has championed stem-cell research — and with a fervour that contrasts starkly with his friend George Bush’s opposition to such research. He voted against lowering the abortion limit from 26 weeks to the present 24. His credentials are those of the perfect secular liberal. All this makes it baffling that he should now choose to join the Church that has so often attacked New Labour’s legislative programme. His friend Cardinal Cormac Murphy-O’Connor has been an outspoken critic, but Mr Blair has, apparently, been unmoved.

Joining the Catholic Church is not for the doctrinally fainthearted. The convert must first make confession of his serious sins. Next comes the Rite of Reception which includes the declaration: ‘I believe and profess all that the Holy Catholic Church believes, teaches and proclaims to be revealed by God.’ Ann Widdecombe says she had struggled with this sentence before being able to convert herself. ‘So either Tony Blair will perjure himself on a massive scale, or he has genuinely repented. But we can’t send a message that we accept people just because they used to be the prime minister.’

Other Catholics go further. ‘St Paul’s conversion on the road to Damascus would pale into insignificance by comparison,’ says John Smeaton, director of the Society for the Protection of Unborn Children, who has a dossier on Mr Blair’s voting record. ‘We need to hear a full repudiation from him. Without one, having Blair as a Catholic is like having a vegetarian in a meat-eating club. It simply does not make sense.’

But might there be more leeway in the conversion process than Mr Blair’s critics suggest? Some would say that there is. The so-called Tablet Catholics — named after the distinguished liberal Catholic weekly — would argue the case for plurality. Cherie Blair puts it like this: ‘The Church isn’t just about the Vatican. It’s about all of us.’ This is the Catholicism of Hans Kung, a Swiss theologian who professes loyalty to Rome but rejects its teaching on celibacy and women priests. That he has been a house guest at 10 Downing Street provides another clue to the Blairs’ thinking.

Mrs Blair made her position explicit in an article two years ago in which she confessed to having ‘doubts’ about some of the Church’s teachings. ‘But I have been taught that you should stay and try to change things. It’s like the Labour party in the 1980s. I wasn’t happy with the way it was going, so I tried to help change it from within. Luckily, we won that battle.’ For all the breathtaking presumptuousness, one cannot fault her ambition. Today: Westminster. Tomorrow: Rome....

Read the entirety of Fraser Nelson's very interesting article in the online edition of the Spectator (U.K.) over here.
Posted by DH at 8:17 AM