Why are America's Real Heroes Unsung? ...Last month, during a prime-time telecast of the 59th Primetime Emmy Awards, actor James Spader and actress Sally Field were honored for their "dramatic portrayals" of fictional characters. In December, the 30th Annual Kennedy Center Honors will be broadcast on prime-time TV so we can pay tribute to "daring" entertainers such as Steve Martin, Diana Ross and Martin Scorsese. Then there are the Country Music Association Awards, the Tony Awards and, of course, the Oscars. Even the best television commercials are celebrated with the ultimate recognition of appreciation -- prime-time network television coverage and front-page newsprint. This week, in her daily "Katie's Notebook" radio broadcast, Katie Couric described those who get colonoscopies as her heroes. 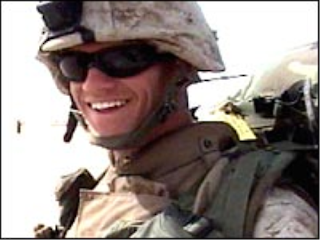 Katie is wrong. Heroes are people who put themselves at risk for the benefit of others. They are selfless. Talented actors, movie stars, Hollywood celebs and winning athletes might make great entertainment, but for people who are really dramatic, people who accomplish real feats of daring, try the names Paul Ray Smith (upper left), Jason Dunham (right) and Michael Murphy (lower left). 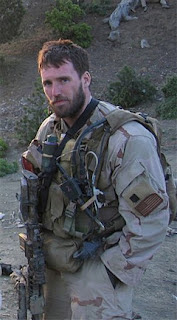 Thanks to our mainstream media, most Americans haven't the foggiest idea who these remarkable men were, what they did or where they did it. The word "were" is important because each of these men is dead. They were all in the prime of life when they died fighting terrorists in Iraq and Afghanistan. Each of them has a story that would make a blockbuster Hollywood film, which most likely will never be made. Each of them lost his life trying to save the lives of others. Each of them is a real American hero -- honored for "gallantry and intrepidity above and beyond the call of duty" with the highest tribute and most prestigious decoration that our nation's military can bestow on an individual: the Medal of Honor. Sadly, few outside their families and a small circle of friends know who they were and what they did...

Oliver North fills us in on what the MSM won't; namely, a few of the details about these genuine American heroes.
Posted by DH at 3:59 AM