Who Cares About the Boorish Behavior of Pete Stark? Not the Democrats or the MSM. 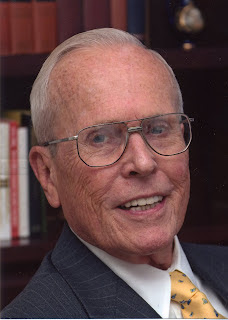 The august and sagacious William Rusher (photo at left) comments on the Pete Stark affair -- not only the odious behavior of the liberal Congressman but the callous indifference shown by Democrats and media to Stark's clodhopping.

...So there we have it: an 18-term Congressman felt perfectly comfortable telling his colleagues and the American people that the president of the United States actually wants to send youngsters to Iraq to get their heads blown off for his amusement.

Does he seriously believe that? I have no idea. A congressman capable of saying such a thing may be equally capable of believing it. On the other hand, he may not believe a word of it. Maybe, in Stark's universe, if you hate somebody enough you can say anything you want to about them, the falser the better.

Certainly Stark qualifies, if any Congressman does, as a crazy liberal. In 2004 his rating by the liberal Americans for Democratic Action was 90 out of a possible 100; his rating by the American Conservative Union was zero. And there is no reason to believe that the voters of his heavily Democratic district on the east side of San Francisco Bay were deeply offended by his statement about President Bush.

For that matter, Democratic politicians in general took it in stride. House Speaker Nancy Pelosi (from the other side of San Francisco Bay) conceded only that Stark's statement was "inappropriate." But there was no resolution of condemnation from his fellow Democrats in the House, and no blasts from the liberal media. And Stark himself, after first refusing to comment at all, offered only a grudging statement falling far short of what was called for.

But the very fact that an assertion so appalling -- charging the president of the United States with arranging the decapitation of American soldiers for his "amusement" -- could slip by with so little reaction (aside from the outrage voiced by a few Republican Congressmen) tells us something truly terrible about what some Americans are beginning to think, and say, of their opponents. If enough people start doing that, this country will be in deep trouble indeed.

The whole column is here.