The Latest Battle in the Episcopal Wars 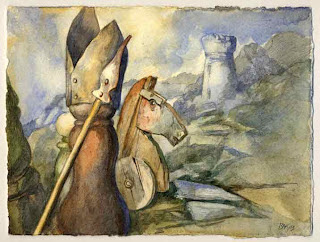 In this Boston Globe story (written by Michael Paulson) we learn of yet another Episocopalian congregation that has had more than enough of it's denominations' squirrelly heterodoxy. An excerpt of that story is printed below. However, few splits are as amicable as the one Holy Trinity managed so I include some comments from (and a link to) a recent David Virtue essay which deals with the weighty question of just who "owns" a congregation's buildings and other assets. Virtue elucidates the issues very well. But first...the Paulson story:

A conservative Episcopal parish in Marlborough is bolting the denomination, in the latest indication that even in liberal Massachusetts the Episcopal Church is losing congregations over its support for gay rights.

Holy Trinity Church in Marlborough is leaving behind its building, renting space in a nearby Methodist church, and affiliating with the Anglican Mission in the Americas, which is overseen by the Episcopal Church of Rwanda.

The small Marlborough congregation, with about 70 active members, is following a national trend in which conservative Episcopal congregations are leaving the Episcopal Church USA to affiliate with theologically like-minded Anglican provinces in Africa.

There are also several other Anglican congregations in Eastern Massachusetts - including in Brewster, Brockton, Middleborough, and Sandwich - that have been formed by individuals who are unhappy with the direction of the Episcopal Church.

Most of those congregations have formed since the Episcopal Church approved an openly gay priest, the Rev. V. Gene Robinson, as bishop of New Hampshire, but their leaders say they have a broader set of concerns about what they perceive to be the liberal theological direction of the Episcopal Church and its willingness to make decisions that are opposed by other provinces of the global Anglican Communion.

"The Episcopal Church is headed in a direction where we cannot follow," said the Rev. Michael McKinnon, the rector of the Marlborough congregation. "More than any particular issue, it really is more from our point of view, when decisions are made that affect the entire Communion, these things need to be discerned through Scripture and tradition at the communion level, not at the local level."

The Marlborough congregation has reached an agreement with the Episcopal Diocese of Massachusetts over the disposition of its assets, reflecting an effort by Bishop M. Thomas Shaw to avoid the litigation that has characterized many splits around the country.

Locally, there has been litigation in Attleboro and Brockton, but McKinnon said yesterday that in Marlborough, "Bishop Shaw was very gracious, and sent us forth with his blessing, and I hope we're setting an example of how this can be done amicably..."

And now, David Virtue weighs in on the "ownership" issue and how the Episcopal hierarchy is using it to try and retain control over individual congregations:

...To keep orthodox bishops from letting orthodox parishes flee with their properties, the national church is pouring huge amounts of money into the law firm of David Booth Beers to see that the dioceses do not weaken and cave into the demands of parishes who may be tempted to fight for their properties.

Because property ownership is in the realm of state corporate law, a few courts years ago began deciding church property disputes according to "neutral principles" while steering clear of doctrinal squabbles. This profoundly bothers the Episcopal Church. The U.S. Supreme Court in 1979 (Jones v. Wolf) not only approved but also encouraged this approach to local church ownership. The Episcopal Church hurried to add the Dennis Canon to its constitution, clearly claiming that property owned by churches is held in trust for TEC.

Times-and the courts-are changing. All this is going to be challenged by whole dioceses that are thinking of fleeing the Episcopal Church.

Mrs. Jefferts Schori, the Episcopal Church's Presiding Bishop, is on record saying that the sale of properties can be sold to another church as long as that church is not associated with other Anglican groups. So it can be sold to say a Methodist or independent evangelical or community church, a restaurant or night club, but not to a fellow Anglican who wishes to remain loyal to the Anglican Way. (It should be noted that the former cathedral in Western Michigan was recently sold to a large evangelical mega church.)

The question that is foremost in the minds of orthodox dioceses who are thinking of leaving the denomination is this: Does the national church have any claim on individual properties of fleeing dioceses?...

Read the rest of David Virtue's intriguing essay right here.
Posted by DH at 10:30 AM