Yes, Virginia; There Are Still a Few Responsible Senators 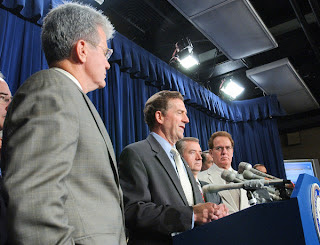 Last week Time Magazine published an interesting (and generally balanced piece) by Jay Newton-Small dealing with that most remarkable of political minorities, the principled, active conservatives who are deeply committed to both moral and fiscal ideals.

Not surprisingly, the article "starred" Senators Tom Coburn (R-OK) and Jim DeMint (R- SC). (They are shown here with DeMint at the podium and Coburn at his immediate right.)

Senator Tom Coburn spent a good part of last Wednesday trying to stop the federal government from building bike paths. He wanted to redirect the $12 million allotted for them to shoring up U.S. bridges following the collapse of a highway bridge in Minneapolis that killed 13 people. The amendment failed 80-18. Undeterred, Coburn, an Oklahoma Republican, immediately introduced his second amendment of the day: a motion to suspend all earmarks — or pet projects often attached in secret to funding bills — until structural integrity of all U.S. bridges can be verified. There were $2 billion in earmarks in the bill, which, if passed, will fund the Transportation Department next year; the amendment failed 82-14.

That same day Senator Jim DeMint, a South Carolina Republican, added his own amendment to suspend a rule that requires the government to use unionized workers to make emergency repairs to bridges, which DeMint says raises the cost by as much as 35%. That amendment also failed, 56-37.

The fact that DeMint and Coburn's amendments were defeated is nothing new in the Senate, and it does little to temper their enthusiasm as Congress rushes to finish all of the funding bills for next year. At a time when the conservative base is lamenting its choice of presidential candidates as well as the priorities of the Oval Office's current occupant, the two are the leaders of a small group of Republican hard-liners working overtime against Democrats and Republicans alike to make a firm stand against what they view as out-of-control spending...

The full article (pretty brief really) is here on the Coburn web site. And over here is a contact information page so that you can send along your thanks to Senators Coburn and DeMint, two of the genuine conservatives still around.
Posted by DH at 11:25 AM