Stop the Presses. Here's a Hollywood Flick with Americans as the Good Guys! 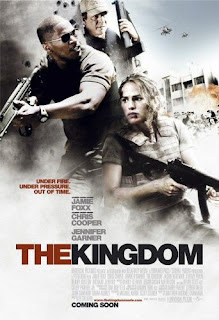 The Kingdom, Universal’s $70 million contribution to the burgeoning Iraq/War-on-Terror genre, will not hit theaters until September 28, but already word on the film is immensely encouraging: all the right people hate it. A predictable early reaction—surely a harbinger of hand-wringing to come—came from Variety critic John Anderson, who damned the film as “jingoistic,” complaining that it turns “anonymous, indigenous peoples into ducks at a shooting gallery.”

Having caught the film at a sneak preview this past weekend, I can confirm that lots of “indigenous peoples” get theirs in this terrifically entertaining thriller—but they are “anonymous” only in the way that we don’t know the names of the Nazi soldiers firing on our troops on Omaha Beach in The Longest Day or Saving Private Ryan. We know who they are—bloodthirsty terrorists—and in The Kingdom they get their just deserts by the cartload, without apology.

This shouldn’t be a big deal, but of course it is. In a season featuring pictures from Brian De Palma and Paul Haggis that portray the War on Terror as an evil travesty and American troops as psychopathic murderers, to find a film so straightforwardly on “our side”—to use the sneer quotes preferred by the New York Times—is almost too much to hope for. Indeed, I kept waiting for the Americans to make a horrific mess of things, or at least for someone to ask some version of “Why do they hate us?” But down to a spot-on ending that recalls the slaughter of Daniel Pearl, that never happens. Instead, we hate them, and manifestly for the right reasons...