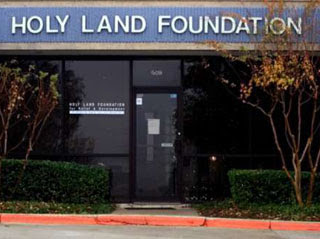 Joseph Myers' article in the American Thinker ("Homeland Security Implications of the Holy Land Foundation Trial") is a riveting read, all the more so because the crucial information Myers shares should be (but isn't) leading the nightly news broadcasts.

The on-going Holy Land Foundation trial has established important facts about the resident domestic Islamic jihad threat inside the United States. Although evidence brought forward in documents and testimony has explosive implications for US Homeland Security, the intelligence community, and every American citizen, relatively little media attention has been paid to it.

This information also has serious implications for professionals, military and civilian, involved in homeland security, DoD plans and strategy as well as national agency intelligence analysts and local law enforcement. The raw documents outlining the strategic goals and activities of the Muslim Brotherhood in America, now exposed for public view, are substantiating the concerns and information long raised by various private sector counterterrorism think-tanks, organizations and blogs such as Stephen Emerson's Investigative Project and Robert Spencer's Jihad Watch among others...

It will take a few minutes to read through the article because it is detailed and comprehensive. But it is very important to do so because you're quite likely not to learn anywhere else these remarkable revelations about the jihadist threat to the safety and security of American citizens.
Posted by DH at 2:11 AM