This Just In: Art DOES Need Justification 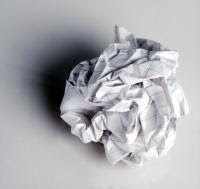 Behold Two public displays: One is an immature stunt, the other a work of art. Can you tell which is which?

Display No. 1: In an empty room in Boston's South End, track lights go on and off at five-second intervals. The lights illuminate nothing except the bare walls and floor. This is "Work 227: The Lights Going On and Off," the brainstorm of a Scotsman named Martin Creed, who has explained it this way: "It's like, if I can't decide whether to have the lights on or off then I have them both on and off and I feel better about it."

Display No. 2: An MIT student walks into Logan International Airport wearing a sweatshirt adorned with a plastic circuit board, on which a handful of glowing green lights are harmlessly wired to a 9-volt battery. On the back of the sweatshirt are scrawled "Socket To Me" and "COURSE VI." The student is electrical engineering major Star Anna Simpson, and the outfit, she explains, is an art project meant to attract attention at an MIT career fair.

OK, so perhaps you already know that Creed's flashing lights won the $30,000 Turner Prize, a prestigious art award presented annually by London's Tate gallery, in 2001. And maybe you're aware that Simpson, the 19-year-old MIT sophomore, was arrested at gunpoint at the airport and charged with disorderly conduct and possession of a "hoax device." Creed's bright idea can be seen through Oct. 28 at the Boston Center for the Arts; Simpson's could lead to a five-year prison sentence. But I'd still like to know: What makes his an award-winning work of art and hers a juvenile prank?

If turning lights on and off qualifies as fine art, then anything does. I can wad up a sheet of paper and call it art. Oh, shoot - Creed beat me to it. In 1995 he devised "Work No. 88: A Sheet of A4 Paper Crumpled into a Ball." (Which should not be confused with his 2004 inspiration, "Work No. 384: A Sheet of Paper Folded Up and Unfolded.")

Creed's ingenuity doesn't end with lights and sheets of paper. Here is Roberta Smith of The New York Times, extolling a survey of Creed's work at Bard College: "Mr. Creed's penchant for provocation is even clearer in two short videos. In each, a person walks in front of a camera trained on an empty, pristine white-on-white space and either vomits or defecates before walking away." Don't be disgusted: Smith reassuringly notes that "the performers manage to maintain both their dignity and their privacy."...

Reading Hans Rookmaaker's enlightening book, "Modern Art and the Death of a Culture," shortly after its publication (1970) helped prepare me for such art frauds as those perpetrated by Martin Creed. But still...the field gets crowded with more silliness, more sickness, and more self-degrading sycophancy every day. God help us.

Here's the rest of Jeff Jacoby's expose' from the Boston Globe.
Posted by DH at 11:12 AM