Did Anglican Leaders "Blink" on Promotion of Homosexuality? 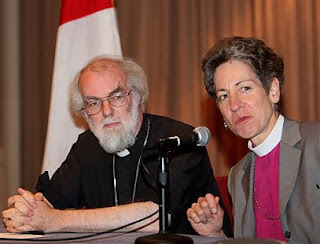 The general media is reporting that Anglican leaders have "blinked" in their standoff with conservatives in the controversies over homosexual clergy, same-sex unions, and so on. For instance, even the Washington Times writing their story from "combined dispatches" writes:

Episcopal leaders agreed yesterday to "exercise restraint" in approving another homosexual bishop and will not approve prayers to bless same-sex couples. It will not be known for weeks or even months whether the bishops, who were pressured to roll back their support for homosexuals, went far enough to help prevent a schism in the Anglican Communion.

Episcopal leaders said they made the decision "with the hope of mending the tear in the fabric" of the communion. "We all hope that our sacrificial actions and our united actions at this meeting once again demonstrate to the wider communion that we treasure our membership and we treasure the other members of the Anglican community," Presiding Bishop Katharine Jefferts Schori said...

However, David Virtue, writer, lecturer, and the force behind Virtue Online, the most popular conservative Anglican news service around, says different.

The verdict is in. The official, and mercifully final statement from the Episcopal Church's House of Bishops is that there will be no retreat, no surrender and certainly an advance of the denomination's pansexual agenda, albeit more slowly, out of deference to Global South leaders who have yet to catch up with the 21st Century post-Christian world of TEC...

What the final statement produced was a carefully nuanced change of tone, but no change in substance or direction of the Episcopal Church's position on same-sex blessings or future homosexual bishops. Only the 2009 General Convention can do that and that is about as likely to happen as hell freezing over...

Read the reasons why Virtue draws these conclusions right here.
Posted by DH at 12:01 PM