Lynne Stewart, Disbarred for Assistance to Terrorists, Is Invited to Speak at Hofstra Law School 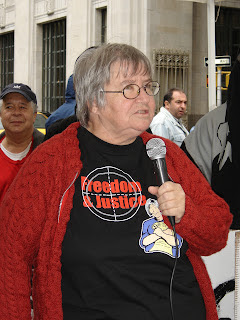 With the Columbia visit of Iran's dictatorial jihadist making Americans think about academic propriety, James Taranto included in yesterday's "Best of the Web" column this revealing item about how Hofstra Law School views the issue:

The Long Island, N.Y.-based Hofstra Law School "is pleased to announce its upcoming 2007 Legal Ethics Conference, Lawyering at the Edge: Unpopular Clients, Difficult Cases, Zealous Advocates," according to a press release. Among the participants is one Lynne Stewart, "who has defended many unpopular clients over the years." The list of participants describes Stewart only as a "high profile radical and human rights attorney."

In fact, Stewart was disbarred after being convicted of providing material aid to terrorists. As a Wall Street Journal editorial noted: "[Her crime consisted in] illegally passing messages between her imprisoned client, Sheik Omar Abdel-Rahman, and his followers in Egypt's Al-Gama'a al-Islamiyya, the terrorist group responsible for killing 62 mostly European and Japanese tourists in Luxor in 1997. Some of those tourists were beheaded; others were disemboweled. The Sheik was also involved in planning terror attacks in New York, for which he is serving a life sentence."

Stewart's own Web site makes clear that she is totally unrepentant. So Hoftstra's law school regards a disbarred criminal as an expert on legal ethics and someone who has been convicted of giving material support to mass murder as a champion of human rights. If we ever have to hire a lawyer, we think we'll steer clear of Hofstra grads.
Posted by DH at 10:48 AM