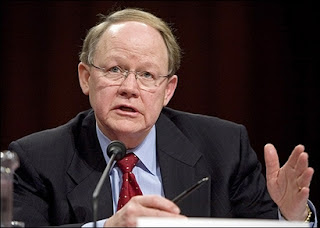 While National Intelligence Director Mike McConnell (photo at left) explained to the House of Representatives Judiciary Committee that "China's and Russia's foreign intelligence services are among the most aggressive in collecting against sensitive and protected U.S. systems, facilities, and development projects," efforts which he described as "approaching Cold War levels," former U.S. Ambassador to the UN John Bolton (photo at lower right) was emphasizing the same problems to reporters. 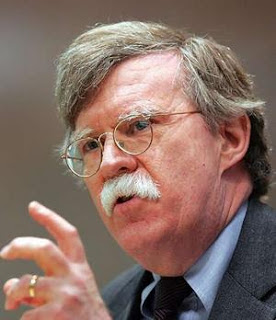 As an example, Bolton noted that Russia is a member of the six-party talks on North Korea -- which he called a "fundamentally criminal regime" -- but said Russia's role has been "unhelpful" in resolving the question of whether the regime should be made to give up its nuclear-weapons program. Bolton stressed that Moscow has also emerged as Tehran's "principal defender and protector. Simply put, Russia needs a higher class of friends in the world than North Korea, Iran, and Syria."

He believes that the United States and other countries must address what he called "legitimate Russian concern" that it feels excluded from Western security structures, vulnerable to Islamic terrorism, and alone in the world with a shrinking and aging population.

Bolton argued that Russia is returning to a "quasi-authoritarian, procommunist, quasi-tsarist -- call it whatever you want -- kind of political system and is not open to democratic change, freedom of the press, and individual liberty. It's going to be very hard for us...to overcome that internal political fact to cooperate on broader efforts like common efforts in missile defense and the continuing global war against terrorism."
Posted by DH at 10:31 AM