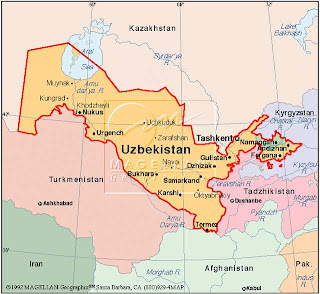 Four years after being severely pressured by the authorities, the small Baptist congregation in Khalkabad near Pap in the eastern Namangan Region (Uzbekistan) is again facing harassment for meeting without compulsory registration. Local Baptists told Forum 18 News Service that police raided successive Sunday services on 29 July and 5 August. In the wake of the raids, church member Nikolai Zulfikarov - who hosts services in his home - could face criminal trial with a possible sentence of up to five years' imprisonment.

Baptists told Forum 18 that a case was launched against Zulfikarov under Article 216 of the Criminal Code, which punishes "illegal organisation of a social or religious organisation". Cases are also being prepared against others present at the services, as well as Baptists from the city of Fergana who travelled to Pap to try to find out why cases were being brought...

For more details on this situation as well as other instances of government harassment and persecution of people of faith and conscience, check out Forum 18 right here.
Posted by DH at 11:14 AM