"There Are Red Lights All Over" This Hillary Funding Situation 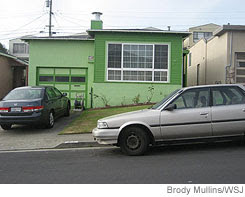 Speaking of the unusual pattern of big-money donations coming out of 41 Shelbourne Ave in Daly City, California, Kent Cooper, a former disclosure official with the Federal Election Commission, said "There are red lights all over this one."

And big-money it is:

Six members of the Paw family, each listing the house at 41 Shelbourne Ave. as their residence, have donated a combined $45,000 to the Democratic senator from New York since 2005, for her presidential campaign, her Senate re-election last year and her political action committee. In all, the six Paws have donated a total of $200,000 to Democratic candidates since 2005, election records show...

...It isn't obvious how the Paw family is able to afford such political largess. Records show they own a gift shop and live in a 1,280-square-foot house that they recently refinanced for $270,000. William Paw, the 64-year-old head of the household, is a mail carrier with the U.S. Postal Service who earns about $49,000 a year, according to a union representative. Alice Paw, also 64, is a homemaker. The couple's grown children have jobs ranging from account manager at a software company to "attendance liaison" at a local public high school. One is listed on campaign records as an executive at a mutual fund...

Read the rest of this intriguing story at the Wall Street Journal Online right here.
Posted by DH at 11:19 AM