Is Brownback Overreacting? The Frustration of the "Second Tier" Candidates 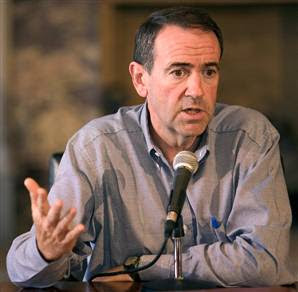 "I consider Sam Brownback a Christian brother and know that he feels likewise toward me. Like Senator Brownback, several key members of my staff are Roman Catholic. As believers, we don't have time to fight each other. We need to focus on having a servant's spirit and bringing hope to those who have given up."

This from Mike Huckabee [at left] after the latest complaint from Brownback about what the Kansas Senator calls a "prejudiced whisper campaign" against him. Actually, the dust-up was a wee one -- an evangelical pastor who actively supports Huckabee (a former governor of Arkansas who also is an ordained Baptist minister) sent along an e-mail which included this statement: "I know Senator Brownback converted to Roman Catholicism in 2002. Frankly, as a recovering Catholic myself, that is all I need to know about his discernment when compared to the governor's."

Since then the pastor has apologized for the e-mail and clarified his sentiments. He even declared that Brownback is his next favorite choice and, if Huckabee were to withdraw from the race, the pastor's support would shift to Brownback. But that's not enough for Sam. He wants more apologies and...I'm afraid, more attention from reporters.

But is this really the kind of attention he thinks will help kindle enthusiasm for his campaign? It won't. After all, there's not much of a scandal here, is there? Brownback and Huckabee both being qualified conservatives, it should hardly be surprising that an evangelical preacher would prefer the Baptist. Plus the fellow who actually sent the e-mail has apologized and there is no evidence whatsoever that Huckabee has organized the "prejudiced whisper campaign" Sam accuses him of. In fact, the fever of the protest and its attention to the wrong source seems more likely to hurt Brownback's chances than help them.

Unfortunately, we see this kind of thing all too often from "second tier" candidates who get frustrated because the mainstream media ignores them. In this case, candidates like Brownback, Huckabee, Hunter, Tancredo and Paul have ideas, credentials and principles that certainly should put them in the running. But those very strengths are why the MSM will marginalize them and thus try to ruin their hopes for election.

But the answers to this difficulty do not include firing on one's friends. No matter how frustrated you feel; no matter how desperate you want a headline; no matter how critical you feel are gaining those two percentage points that might put you in fifth place instead of fourth...don't lose control and start embarassing the folks who looked primarily to your character when first deciding to support you.
Posted by DH at 9:34 AM