When Tyrants Fill The Vacuum: What John Kerry Won't Remember 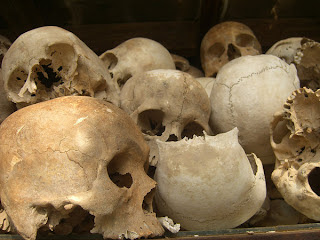 John Kerry, when asked recently by the Chicago Tribune about the horrors which ocurred in Vietnam and Cambodia when the U.S. withdrew its troops in 1973 (and in 1975 even cut off all aid to the South Vietnamese government), calmly denied they ever happened!

"We heard that argument over and over again about the bloodbath that would engulf the entire Southeast Asia, and it didn't happen," Kerry said.

But, especially relevant to a nation whose Democrat leaders are demanding a similar total withdrawl from Iraq, it is a good thing to look again at the historical record. James Taranto does in today's Wall Street Journal Online.

To corroborate the experiences of refugees now living in Orange County, the Register interviewed dozens of former inmates and their families, both in the United States and Vietnam; analyzed hundreds of pages of documents, including testimony from more than 800 individuals sent to jail; and interviewed Southeast Asian scholars. The review found:

* An estimated 1 million people were imprisoned without formal charges or trials.

* 165,000 people died in the Socialist Republic of Vietnam's re-education camps, according to published academic studies in the United States and Europe.

* Thousands were abused or tortured: their hands and legs shackled in painful positions for months, their skin slashed by bamboo canes studded with thorns, their veins injected with poisonous chemicals, their spirits broken with stories about relatives being killed.

* Prisoners were incarcerated for as long as 17 years, according to the U.S. Department of State, with most terms ranging from three to 10 years.

* At least 150 re-education prisons were built after Saigon fell 26 years ago.

* One in three South Vietnamese families had a relative in a re-education camp.

According to John Kerry, "it didn't happen."

Things were even worse in Cambodia, as the Christian Science Monitor reported in 2005:

When the Khmer Rouge victoriously entered Phnom Penh 30 years ago, many people greeted the rebels with a cautious optimism, weary from five years of civil war that had torn apart their lives and killed hundreds of thousands of Cambodians. . .

During the nearly four years following that day--April 17, 1975--Cambodia was radically transformed. . . .

Everyday freedoms were abolished. Buddhism and other forms of religious worship were banned. Money, markets, and media disappeared. Travel, public gatherings, and communication were restricted. Contact with the outside world vanished. And the state set out to control what people ate and did each day, whom they married, how they spoke, what they thought, and who would live and die. "To keep you is no gain," the Khmer Rouge warned, "To destroy you is no loss."

In the end, more than 1.7 million of Cambodia's 8 million inhabitants perished from disease, starvation, overwork, or outright execution in a notorious genocide.

But don't worry. According to John Kerry, "it didn't happen."

Last week, as we noted, Kerry's colleague Barack Obama opined that genocide in Iraq would be preferable to America's continued presence there. But John Kerry has shown the way. If genocide, or some lesser horror, does occur in the wake of a U.S. retreat, Obama can simply assert: "It didn't happen."

Prominent Democratic officeholders are willing to deny or countenance crimes against humanity in order to justify a popular political position. Doesn't this shock the conscience of Democrats?

As a relevant action step in the crying need to remind our Congressmen and Senators of what happens when tyrants are given a vacuum to fill with bloodshed, I encourage you to send along this post or some of the salient points it includes to those who can yet keep these things from happening in Iraq. Use this page for contact info.