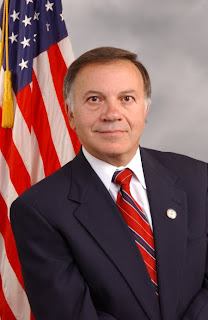 Republican presidential hopefuls Mitt Romney and Tom Tancredo [photo at left] are ticked off at the Sam Brownback campaign for using their Planned Parenthood "connections" in an Iowa telephone campaign.

"Mitt Romney is telling Iowans he is firmly pro-life. Nothing could be further from the truth," said the Brownback campaign's phone message. The message goes on to attack the former Massachusetts governor's wife, warning, "His wife, Ann, has contributed money to Planned Parenthood."

Romney's people are outraged and demanding apologies...but they haven't successfully explained why the nation's #1 abortion organization did, in fact, receive contributions from Mrs. Romney.

Tancredo's case is different for there the Colorado Congressman's record is not only staunchly pro-life but so, it seems, is his history of charitable donations. However, Brownback's campaign is pointing to the fact that Tancredo has received campaign contributions from someone who has also given to Planned Parenthood.

"Say no to Tom Tancredo and his Planned Parenthood friend and help end abortion in America," the caller says, according to a script confirmed by Brownback's campaign.

Tancredo said Brownback, a Kansas senator, is a longtime friend who "is well aware of my lifelong commitment to the unborn." "I call on Senator Brownback to cease with the maliciously misleading push calls intended to harm me and apologize," Tancredo said in a statement.

Brownback's campaign stood by both calls. "We stand by the accuracy of our statement that Mrs. Romney financially supported Planned Parenthood, the largest abortion provider in the world," said spokesman John Rankin. Rankin also said Tancredo "says he is committed to being pro-life but has accepted thousands of dollars from the founder of a major Planned Parenthood network."
Posted by DH at 9:25 AM