Sex Selection Abortions: The Injustice Leads to Yet More Injustice 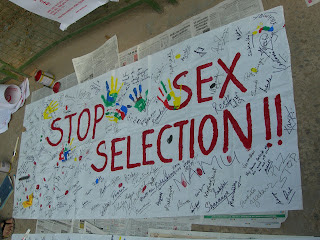 Abortionists in Asia are using the less expensive ultrasound scans to assure the age-old preference for male offspring, creating massive problems from the resultant disparity in the respective numbers of the sexes.

In Communist China, where a one-child policy is still brutally enforced, the national ratio is about 120 boys per 100 girls with many provinces being even more highly skewed. A January report in China Daily suggested that within less than 15 years, there will be 30 million more men than women of marriageable age, leading to widespread social crises.

Already, the skewed sex ratio has resulted in a rise in the kidnapping and trafficking of women, both within the country and internationally. Mail order bride services have mushroomed, which, for a fee of up to $2,400, import wives for Chinese men from other countries, especially Burma. Joseph D'Agostino, vice president for communications with the Virginia-based Population Research Institute (PRI), calls the one-child policy "a massive violation of human rights" which affects both women and men.

"When it comes to sex selective abortion, it's something that's leading to grave social problems—the extermination of tens of millions of girls," says D'Agostino. "And of course it's bad for the boys too because they're going to grow up and not be able to get married. It seems to be against everyone's interests except the very elite and the communist government that runs China, which has its own agenda and its own goals."

D'Agostino says Beijing has now become aware of the problems of sex selection, and recently introduced cash bonuses for families who have girls, but the gap in the boy/girl ratio is still widening. Meanwhile, the one-child policy will remain firmly in place for another 50 years, the goal being to reduce China's population from the present 1.2 billion to 600 million.

Because of the policy, pregnant women are subjected to harassment, financial penalties, and forced abortions and sterilization, often in the late stages of pregnancy. Chen Guangchen, a blind activist who has fought against the one-child policy, said last October that more than 120,000 women in Shandong province alone were at that time forced to undergo sterilizations and abortions. Forced abortion and sterilization is enforced in Tibet as well...

Read more of this story in The Epoch Times right here.