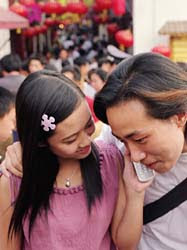 From the Staten Island Advance comes this report of a possible check (at least, temporarily) of an atrocious 2nd Circuit Court decision:

The House yesterday approved an amendment offered by GOP Rep. Vito Fossella that would benefit Chinese political refugees who are affected by that country's forced sterilization policies.

The amendment, which passed on a voice vote, would block the U.S. Justice Department from enforcing last week's decision by the 2nd Circuit Court of Appeals that narrowed the definition of a political refugee to only the individual who was forced to undergo an abortion or sterilization by the Chinese government.

The amendment was attached to the Commerce, Justice, Science, and Related Agencies Appropriations Act of 2008, which passed the House yesterday.

Under an 11-year-old policy, immigration courts in the United States have considered both the individual who had undergone the medical procedure and his/her spouse as refugees. "It is clear that China's barbaric forced sterilization policy harms both the husband and wife," Fossella (R-Staten Island/Brooklyn) said. "It is unfortunate the 2nd Circuit overturned a policy that provided safety and a new beginning to people who were brutalized by their native government." The amendment specifically prohibits the Justice Department from using funding in its 2008 budget to enforce the 2nd Circuit Court's ruling.

Fossella said the amendment would serve as a stop-gap to protect asylum seekers while legislation is drafted to amend the statute to explicitly state that spouses are eligible. "This amendment recognizes the extreme physical and emotional trauma caused by China's policy of forced abortions and sterilizations on parents," Fossella said.

Fossella now must work to get the Senate to pass a similar amendment or to have it included in a Senate-House conference report on the overall bill.
Posted by DH at 7:59 AM