I've Got You Under My Skin: A Few Things You Don't Know About The Tattoo Craze 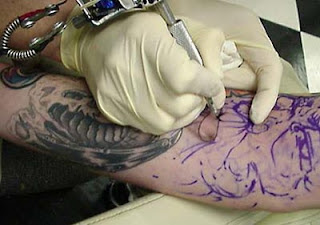 The World Congress of Families passes along a few insightful tidbits about Western culture's new fascination for tattoos. The first two come from a Natasha Singer story in the June 17 New York Times and the third from a 2002 article in Pediatrics Magazine by Sean T. Carroll et al.

1) "A report by the Food and Drug Administration estimated that as many as 45 million Americans have tattoos. The report based the number on the finding by a Harris Interactive Poll in 2003 that 16 percent of all adults and 36 percent of people 25 to 29 had at least one tattoo. The poll also found that 17 percent of tattooed Americans regretted it."

2) "Dr. Tattoff is part of a growing industry catering to people who may not have thought about the implications of 'forever' the first time around.

Removing tattoos is costly, uncomfortable and time-consuming, but the affinity for body art is so strong that some people say they do it to clear space to tattoo all over again.

Many dermatologists specialize in laser tattoo removal, and some laser hair-removal centers are adding services. In California, there are removal centers like Dr. Tattoff, Tat2BeGone and Tattoo MD.

Most of Dr. Tattoff's clients are women ages 25 to 35, said James Morel, the chief executive of the company, which has given more than 13,000 tattoo laser treatments since opening here in 2004. 'Maybe women are getting more tattoos than they used to,' Mr. Morel said, 'or maybe they just have a higher level of tattoo regret than men.'"

3) Teens who have their bodies tattooed or pierced are especially likely to reject those principles of sexual restraint that have traditionally protected marriage and family life. What is more, teens with tattoos and body piercings are often engaged in illicit drug use, frequently manifest disordered eating behaviors, and are all too often at risk for suicide.

The evidence linking tattoos and body piercings (other than in the ear lobes) to problematic adolescent behavior appears in an article recently published in Pediatrics by a team of researchers from the Rochester School of Medicine and the Naval Medical Center in San Diego. Survey data collected from 484 adolescent patients at the Naval Medical Center revealed what the researchers characterize as "clear differences" separating teens with tattoos and body piercings from those without. These differences indicate a much higher prevalence of "risk-taking behaviors" among those with tattoos and body piercings than among those without. This risk-taking often shreds traditional standards of chastity or continence: "adolescents with at least 1 T[attoo]/P[iercing] were more sexually active and at greater risk sexually than adolescents without T/P" (p< .001 for both tattoos and for body piercings and for both males and females). This risk-taking also translates into significantly elevated rates of "gateway drug use" (tobacco, alcohol, and marijuana), hard drug use (cocaine, crystal methamphetamine, and Ecstasy), disordered eating behavior, and suicide for both tattoos and body piercings. (In contrasting adolescents with at least one tattoo or body piercing with peers without, the researchers calculate the following scores of statistical significance: for gateway drug use, p< .001; for hard drug use, p< .001; for disordered eating behavior, p = .003; for suicide, p = .028.)

Given the troubling findings of this survey, it comes as no good news that "Ten to 13% of adolescents age 12 to 18 [now] have tattoos" and that "body piercing at locations other than the ear lobes ... also is ... increasing in frequency and acceptance.
Posted by DH at 11:45 AM