The Optimism of An Old Abortion War Horse 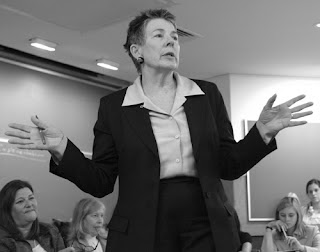 Martha Burk, speaking at the National Press Club last week, gave a spirited and extravagantly optimistic review of the feminist movement (though, truth be told, Burk prefers the term "womanism" to "feminism.") You'll remember Burk for her challenging the male-only membership policy at the Augusta National Golf Club, home of the Masters golf tournament, when she was the chairwoman of the National Council of Woman's Organizations.

I print here an excerpt from the news story about Ms. Burk's appearance:

...A question about abortion soon followed, and she was asked why, with so many other notable issues, such as health care and pay equity, abortion was always at the top of most debates.

Burk said women's priorities are different than men's and that "not sending children to Iraq and daughters to the back alley" are at the top of her list.

Burk's talk also included her advice to Republican men that they abandon the losing issues of "guns, gays and abortion." Recent political developments, she argued, proved that these were no longer of interest to voters. And of the fact that Burk's type of "womanism" remains unattractive to many, many women, she merely quipped, "I think it's a shame that there are women who still don't get it, and it is our job to make sure they do."
Posted by DH at 9:39 AM