And Nary a Thank You: Dissing America's Generosity

...Since the Israel-Jordan peace treaty was penned on October 26, 1994, American taxpayers have supported Jordan's 6 million people — half of whom are Palestinian Arabs — to the tune of $350 million a year, a total of $4.5 billion to date. Still, Jordanian public opinion is fiercely hostile to America.

Since Egypt and Israel signed on the dotted line on March 26, 1979, Israel has received some $80 billion, and Egypt has collected $60 billion, according to congressional statistics. If American spending on Egypt is far from over, so are the insults heaped on it daily in the Egyptian press.

Even the quarrelsome Palestinian Arabs who routinely burn American flags have received well over $20 billion in food and humanitarian aid from Uncle Sam.

Whether it is money well spent is arguable. What is certain is that America, while Europe and the Arab countries watched, has done more than its share as a Middle East peacemaker... 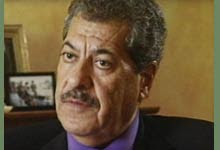 Youssef M. Ibrahim (left) has penned a provocative piece about America's amazing generosity to the Middle East (and before that, to Europe), a generosity that has gone without recognition...let alone a thank you note. Read the article in the online edition of Jewish World Review right here.
Posted by DH at 6:46 AM