Straight Talk from the Vatican 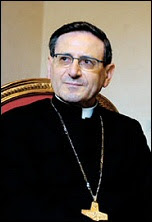 In stark contrast to what usually is heard in the public square from religious leaders (see the previous post for an example), the world was given a much-needed "wake up call" earlier this week from Archbishop Angelo Amato, the Vatican's secretary of the Congregation for the Doctrine of the Faith. Printed below is an excerpt from the Reuters story via the Mirror (U.K.)

The Vatican's second-highest ranking doctrinal official on Monday forcefully branded homosexual marriage an evil and denounced abortion and euthanasia as forms of "terrorism with a human face".

The attack by Archbishop Angelo Amato, secretary of the Congregation for the Doctrine of the Faith, was the latest in a string of speeches made by either Pope Benedict or other Vatican officials as Italy considers giving more rights to gays.

In an address to chaplains, Amato said newspapers and television bulletins often seemed like "a perverse film about evil". He denounced "evils that remain almost invisible" because the media presented them as "expression of human progress".

He listed these as abortion clinics, which he called "slaughterhouses of human beings", euthanasia, and "parliaments of so-called civilised nations where laws contrary to the nature of the human being are being promulgated, such as the approval of marriage between people of the same sex ..."

...Amato, who is said to be very close to Pope Benedict, criticised the media's coverage of ethical issues.

After denouncing "abominable terrorism" such as that carried out by suicide bombers, he condemned what he called "terrorism with a human face", and accused the media of manipulating language "to hide the tragic reality of the facts".

"For example, abortion is called 'voluntary interruption of pregnancy' and not the killing of a defenceless human being, an abortion clinic is given a harmless, even attractive, name: 'centre for reproductive health' and euthanasia is blandly called 'death with dignity'," he said in his address...

Do you hear this from your preacher?