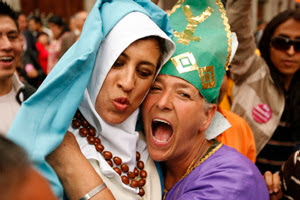 The photo at left shows pro-abortion zealots dressed in bizarre parodies of Roman Catholic clergy as they celebrate Mexico City's legalization of abortion.
Below is an excerpt from the AP report with a quick comment of my own added.

The proposal, approved 46-19, with one abstention, will take effect with the expected signing by the city's leftist mayor. Abortion opponents have already vowed to appeal the law to the Supreme Court, a move likely to extend the bitter and emotional debate in this predominantly Catholic nation.

"Decriminalizing abortion is a historic triumph, a triumph of the left," said city legislator Jorge Diaz Cuervo, a leftist social democrat who voted for the bill. "Today, there is a new atmosphere in this city. It is the atmosphere of freedom..."

No, that new atmosphere, Mr. Cuervo, is one of moral decadence -- an atmosphere of deliberate lies, injustice, and brutality which will not escape the judgment of a holy God. Therefore, your celebrations are most tragically inappropriate; a fact I pray you will recognize before that divine judgment falls.
Posted by DH at 10:43 AM