Remembering Rosie, If You Can Stomach It 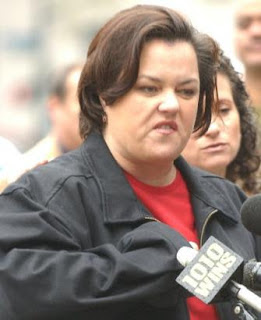 Rosie is being "let go" from ABC but she will undoubtedly be back somewhere on TV soon.

Well, her penchant for controversy brings constant media attention and thus brings the ratings up. That, of course, and the fact that she hasn't yet offended the wrong kind of people!

The Media Research Center has made available a few choice quotations and video clips from Rosie's ravings that you might want to scan through. That particular MRC page is right here, introduced by this paragraph:

As co-host of ABC’s The View, Rosie O’Donnell has used her daytime perch to push an array of extreme left-wing and anti-American views. Soon after her debut in September 2006, O’Donnell used the anniversary of the 9/11 attacks to insist that "radical Christianity is just as threatening as radical Islam." In a similar vein, she advised her audience: "Don’t fear the terrorists. They’re mothers and fathers," while suggesting that "the Patriot Act has robbed us of us our civil liberties in this country, that fear has taken over from faith in democracy, in the Constitution?" In March, O’Donnell even suggested that the government was hiding the truth of 9/11 attacks, arguing: "Miraculously, for the first time in history, steel was melted by fire. It is physically impossible..."
Posted by DH at 11:14 AM