The Church of England: Denying the Faith But Going Greener Than Thou 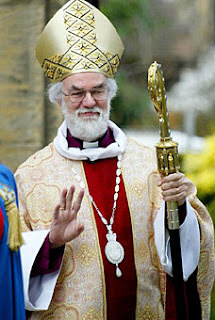 In a classic case of "rearranging the deck chairs on the Titanic," the Church of England desperately tries to find some reason for existence, now that it has thrown orthodox Christian beliefs away.

Jettison the authority of the Bible. Deny the physical resurrection of Jesus. Endorse abortion and euthanasia. Ordain non-believing clerics with lifestyles of sexual perversion.

But, by goddess, don't use that barbecue grill!

Here's an excerpt from the Daily Mail (U.K.) story:

The Church of England published a set of green commandments today aimed at persuading Christians to help save the planet. They are contained in a pocket-sized booklet, entitled How many light bulbs does it take to change a Christian?, instructing believers that they have a moral obligation to look after God's creation. Included in the publication are a series of eco-friendly lifestyle tips.

It was published as part of the Church's Shrinking the Footprint campaign - a response to the General Synod's charge to the Church to engage with climate change and work on reducing its carbon emissions by 2008.

Backing the booklet, Dr Rowan Williams, Archbishop of Canterbury, said today: "There are many small steps that each of us can take to lighten the load on our planet and this guide gives some practical examples of where each of us can start. "I commend it to all Christians looking for ideas and inspiration on what they can do to make a positive difference for the environment."

At the launch of the Church's eco-drive two years ago Dr Williams said: "For the Church of the 21st Century, good ecology is not an optional extra but a matter of justice. It is therefore central to what it means to be a Christian."

Among the lifestyle changes suggested in the booklet are: organising a car-sharing scheme for travelling to and from Sunday worship, holidaying locally rather than travelling abroad and using a toaster rather than a grill. Parishioners are also urged to make their local churchyard a 'green lung' for the community by setting aside a 'wild area'. The booklet advises a review of any floodlighting the church has, checking whether the bulbs are energy-efficient and if they are directed at the building rather than the sky. Cancelling "wasteful" junk mail is also advised...
Posted by DH at 11:28 AM