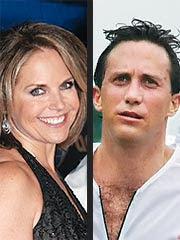 This is a description of the perky Katie Couric from this week's People Magazine in a story that titillates readers about her new romance with a man 17 years her junior.

But the very personality that 33 year-old Brooks Perlin finds so "cute" and "playful" is causing older television viewers to completely distrust her as a news anchor. Indeed, Couric's painful lack of both balance and gravitas has proven to be a terrible combination for CBS officials who hired her at such a high salary...and with such high hopes.

CBS News continues as a distant third in the all-important network news competition. In fact, since Couric replaced the plodding and heavily biased Bob Schieffer, the CBS ratings have slipped still further! And, as the Philadelphia Inquirer's Gail Shister presents it, there's little hope of improving the situation while Couric remains bouncingly on the set.

CBS executives deny it, but there's a growing feeling within the network that Katie Couric is an expensive, unfixable mistake.

So unfixable that Couric - the first woman to anchor a network nightly newscast solo - may leave CBS Evening News, probably after the 2008 presidential elections, to assume another role at the network, CBS sources say.

Despite her A-list celebrity, her $15 million salary, and a promotional blitz worthy of a Super Bowl, the former star of NBC's Today has failed to move the Nielsen needle on No. 3 Evening News since her debut seven months ago.

In a bottom-line business like television, that's a cardinal sin. Already-low morale in the news division is dropping, says a veteran correspondent there.

"It's a disaster. Everybody knows it's not working. CBS may not cut her loose, but I guarantee you, somebody's thinking about it. We're all hunkered down, waiting for the other shoe to drop..."
Posted by DH at 11:58 AM