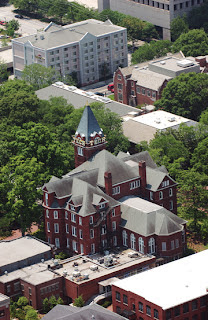 One would certainly think that a proud "Old South" university would be a haven for idealism, freedom and such traditional American values of courtesy and fair play.

But then...such virtues are way out-of-date in the new world of socialist academia. Check out this disturbing example of individually targeted terrorism at Georgia Tech.

...David French, [Dr. Ruth Malhotra's] lawyer in this case and a longtime litigator in matters of free speech and student rights, is also stunned by what has happened to Malhotra: "I’ve never seen anything quite like this. The tolerant left at Georgia Tech seems to have decided that Ruth must be destroyed to protect `tolerance.’ The administration sees one of its own threatened by death and rape and they just sit there. I’ve seen conservative students suffer a lot of abuse for their beliefs. But I’ve never seen abuse cross over into threats. And I’ve never seen an administration sit on its hands while one of its students is threatened by death and rape. It makes you wonder: have we gone past simple intimidation to death threats now? Is this sort of thing going to become a standard part of left’s playbook in intimidating conservative students? How far will they go?"...
Posted by DH at 2:47 PM