Removal of William and Mary Cross Costs $12 Million and Counting

In the ongoing story of the marginalization of Christianity in America, the case of the Wren Chapel cross removal by the President of the College of William & Mary has been a headline item for awhile now. (See this Vital Signs Blog post from January 12). 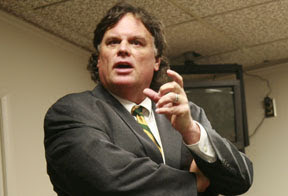 The latest details of this story are 1) the decision by an established supporter of the College to withhold a $12 million donation previously pledged -- the reason for the withdrawl specifically being named as the cross removal; 2) the arrogant refusal to budge of President Gene Nichol (shown at left); and 3) the inevitable appointment of a couple of committees to study the situation yet a little more. Good grief!

Here at VSB we love grassroots activists who let the voice of faith and reason be heard in the public square and so the following letter, written to the editor of Hampton Roads' Daily Press, gets our applause:

At cross purposes with W&M's welfare

The inevitable has happened at the College of William and Mary. Earlier, the college's board of visitors proudly stated its support of President Gene Nichol's decision regarding display of the cross in the Wren Chapel, and in fact, the board further stated that future donations to the school would not likely be jeopardized. Now, it is reported that a significant and sizeable donation of $12 million has been revoked.

And now, the good Mr. Nichol exclaims how unfortunate this is, because "it will only hurt the students." What arrogance, or stupidity! Nichol fails to understand, or simply will not admit to the fact that the revoked donation is clearly his own doing, and that it is he who has hurt the students, not the donor. His unthinking decision to remove the cross reflects badly not only on himself and the school's official board, but also on the school itself, which has gained national notoriety over this controversy and is already distinguished as one of the most liberal colleges in the country.

How could this not have been anticipated?