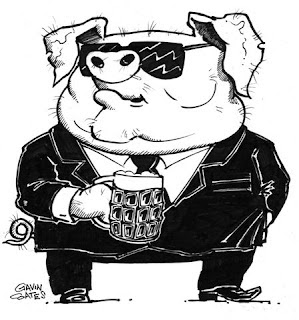 Donald Lambro's column examining the pork spending in the Democrat military appropriations bill is a very good one. Here's a teaser:

House Democratic leaders want to add $24.6 billion to President Bush's $95 billion request for U.S. troops in Afghanistan and Iraq, but it's not for more weaponry or life-saving armor.

Most of the added money stuffed into the emergency supplemental bill, which was expected to come up for a vote this Thursday, is for the kind of costly, pork-barrel, special-interest, vote-buying handouts that Democrats promised they would end if they won control of Congress.

But less than three months after taking over the House leadership, the Democrats returned to the old logrolling practice of buying votes for a bill whose micromanaging war provisions to ultimately defund our troops has raised deeply troubling doubts in the minds of many of their members.

The bill contains $25 million in subsidies for spinach growers hurt by last year's E. coli outbreak to persuade Rep. Sam Farr, D-Calif., to hold his nose and vote for it. There's another $75 million "to ensure proper storage for peanuts" to convince three conservative Democrats from Georgia to do likewise.

Other doubting Democrats were offered $1.48 billion for livestock ranchers, plus $20 million to reclaim damaged farmlands, $500 million for "urgent wildland fire suppression" and $120 million for shrimp and Atlantic fishing interests.

With so much at stake in the latest attempt to reduce the violence in Iraq and give the Iraqi government time to regain some semblance of control over the country, the spectacle of Democrats using a war-funding bill for pure political vote-buying pork was sickening...
Posted by DH at 10:32 AM