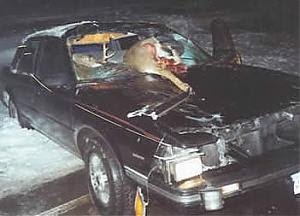 One of our pro-life colleagues from across the Missouri River, Jessica Dykstra, makes a special "guest blogger" appearance today as she examines government's penchant for the weird and wacky.

Oh, deer! Yes, it’s a bad pun, but it's not without a reason for right here in our peaceful little state of Iowa, we have something of a deer problem, and our legislature has an idea of how we can fix it. But I’m not quite sure what would be worse: the problem or the solution.

For those of you who have not yet heard the news, some parts of Iowa including the Iowa City and Council Bluffs areas are being faced with deer infestation caused by (no surprise) an excess in the number of fawns being born. The increasing deer population results in damage to property; to lawns, (you may want to put on shoes before going outside); and gardens (apparently deer like veggies better than many children). But, most seriously, the uncontrolled deer population poses a very real threat to vehicles and the human beings riding within. The accompanying photos serve as a reminder of just how dangerous the situation is. All this damage and risk has had the effect of making people unhappy, and once people get unhappy enough, they contact their legislators.

I’ll admit I really don’t know exactly how the following idea got into the legislature, and I certainly don’t know how far it will be taken, but there has been a solution offered to this ever-increasing deer population -- we must stop so many deer from reproducing! This seems simple enough, right? Just declare an open season for a while. Revenue will come in for all the deer tags hunters buy, and the deer population goes down. "Lead injection" is cheap, effective, and permanent.

In short, it is everything the deer population control plan which has actually surfaced in the legislature is not because the proposal being considered involves the shooting of contraceptives into deer! That's right, contraceptives that will sterilize either male or female deer for a period of two years at a cost of $300 plus per animal. And, of course, during these two years the sterile deer (if and when the drug works) will still be able to trample fences, chew up gardens (that is, unless some legislator decides the deer should also be injected with an appetite suppressant) and, saddest of all, pose a grim threat to traveling families.
Thanks, Jessica. Your comments are clever and light-hearted but they go straight to the point as well. Government should look to common sense, cost-effective measures to protect human life and property. This bizarre plan to temporarily sterilize the deer is neither.
Posted by DH at 11:17 AM