The second of two staff members of the John Edwards presidential campaign has resigned because of personal posts on blogs attacking Catholic and pro-life advocates over abortion. Melissa McEwan has also resigned, joining Amanda Marcotte, who also left after pro-life groups criticized her posts.

McEwan referred on her blog to President Bush's pro-life supporters as his "wingnut Christofascist base."

On her blog, Marcotte publicly blamed her most vocal critic, Bill Donohoe, president of the Catholic League..."Bill Donohue doesn't speak for Catholics, he speaks for the right wing noise machine," she groused.

Donohoe said he wouldn't give up on publicizing the pair's problematic remarks until something was done about their employment with the campaign. He said if the comments had attacked Jews, African-Americans or homosexuals they would have been immediately fired. 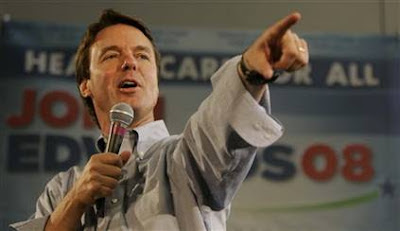 "It's too bad that Edwards didn't make the decision himself to get rid of them," Donohue said.

"Why he had to wait for these women to bail on their own doesn't speak well for him. But I'm delighted, and as far as I'm concerned, this closes the issue," he added.

Last week, saying they wrote personal comments on their own web sites that don't reflect his views, Edwards released a statement saying he would not fire either activist. The former North Carolina senator said he was offended by the content of the posts -- which included inflammatory and profane attacks on the church -- but said he wouldn't fire them. "I've talked to Amanda and Melissa; they have both assured me that it was never their intention to malign anyone's faith, and I take them at their word," Edwards said

In addition to criticizing the church on abortion, the posts derisively referred to Pope Benedict XVI as a “dictator" and Marcotte wrote that the Catholic Church’s teaching against the use of contraception forced women to “bear more tithing Catholics.”

"The Catholic church is not about to let something like compassion for girls get in the way of using the state as an instrument to force women to bear more tithing Catholics," she wrote.

Marcotte also used explicit language to discuss what would have happened has the Virgin Mary used the Plan B morning after pill instead of giving birth to Jesus Christ.

She also posted a letter from the pro-abortion Catholics for Free Choice blasting pro-life advocates and Catholics who oppose abortion.

Steven Ertelt gives a good summary of this weird story over at LifeNews.com. Read it in its entirety here.
Posted by DH at 10:14 AM