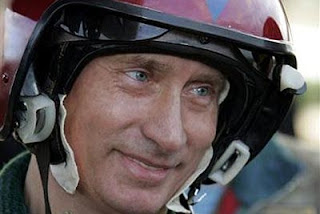 1) Russia's President Vladimir Putin did a bit of chest thumping earlier this week as he boasted to reporters in Italy, "Russia will determine her place in the world by herself, and will strive for a well-balanced and multipolar world." He went on to insist that "since the collapse of the bipolar world and the two confronting systems, an illusion has arisen among some people that the world had became monopolar and that all the world problems could be quite easily resolved from one center. It turned out that this was not the case. Such approaches have led to a growing number of crises, while the means to resolve them have become more limited."

This opens the door to new Russian activity, says the President. "In these conditions, Russia's economic, military, and political abilities are clearly growing. A competitor that was nearly written off is emerging in the world -- even if this movement is not yet so noticeable at first sight. This seems to me the main reason [for distrust and criticism of his regime] -- the unwillingness to consider Russia's legitimate interests, and the wish to put her in a place someone else has chosen for her."

Hmm. I can't help but suggest that Putin's use of "bipolar" to describe the world is, at the very least, ironic. And, at the worst, it elicits questions as to just how "Dr." Putin will seek to relieve the world's symptoms.

2) Whatever the source of Putin's motives to again play the Russian bear, his desired means isn't rating high with the people. "Vedomosti," a Russian newspaper reported on the day of Putin's above remarks that a respected poll indicated that most Russian citizens do not think much of President Putin's assertive foreign policy nor do they think his attempts to play the "energy card" will restore Russia to it's pre-Reagan strength. Catch this -- nearly half of the poll's respondents are well satisfied if only Russia remains among the world's 10 or 15 most advanced economies and politically influential countries. Only 34% want Russia to become a world power. Specifically, Putin's ambitious strategy of making Russia a global leader in the energy sector is the least popular with the poll's respondents -- only 4 % approval.

Levada Center Deputy Director Aleksei Grazhdankin, another prominent pollster, said that "Our opinion polls indicate that over half of Russian citizens would like to be living in a country where the needs of the population are recognized and treated as a priority. Imperial aspirations don't rate very high on their list of priorities."

3) Two days after these events, Russia shouted out its protests over the ongoing development of U.S. strength, especially when the military might of Uncle Sam is being flexed so close to home. Speaking in New Delhi on January 24, Russian Defense Minister Sergei Ivanov reiterated recent Russian criticism of U.S. plans to construct a radio-locating station in the Czech Republic and place missile-defense equipment in Poland as part of its new broader missile-defense system. Taking a cue from old-style Soviet obscurantism (no lie was ever TOO big for Russian politicians to mouth), Ivanov argued, "We are told that the creation of such a system or sites for its positioning is necessary for the interception of missiles that North Korea and Iran can launch against the United States and its allies. We reply, knowing the real state of affairs, that neither North Korean nor Iranian missiles can reach a designated target, because [such missiles] do not exist. And then a logical question arises: against whom is this missile-defense system being made?"

Earlier, Colonel General Vladimir Popovkin, who commands the Federal Space Forces, said that the "placing of a radio-locating station in the Czech Republic and antimissile equipment in Poland is a real threat to us" while Deputy Foreign Minister Sergei Kislyak claims, "We do not understand why the United States wants to deploy an antimissile-defense system. These plans are not inspired by global security interests." 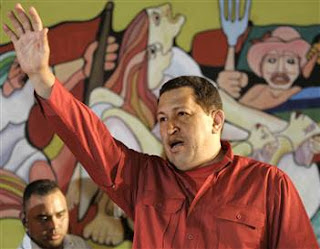 4) Apparantly, much more trustworty on the issue of global security are those warm-hearted Russian leaders whose sales of high-tech weapons and military hardware are soaring. Indeed, the main Russian supplier delivered $5.3 billion worth to foreign clients in the past year alone. Among the sales? Aircraft accounted for 57% of all military hardware sold abroad while naval equipment made up 39%. One of the key buyers was Hugo Chavez in Venezuela. Other experts pointed out that China, India, and several Middle Eastern countries are likely to remain Russia's main arms customers. The daily "Vedomosti" reported on January 23 that "the Russo-Indian military technology cooperation program for 2001-10 is estimated to be valued at $18 billion, of which $11 billion worth of military hardware has already been delivered."
Posted by DH at 3:17 PM