Belarus Makes the State of the Union Speech...But Not Abortion, Marriage, or ESCR 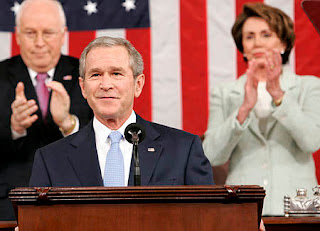 A friend and brother in Christ who lives in Belarus (a country I have briefly visited on nine different occasions since Alexander Lukashenka assumed dictatorial powers there) sent along this brief note after reading the President's State of the Union address:

"We will continue to speak out for the cause of freedom in places like Cuba, Belarus, and Burma -- and continue to awaken the conscience of the world to save the people of Darfur." (George W. Bush, 43rd President of the United States, January 23, 2007, State of the Union Address)

I am not a great fan of George W. (and don't have to be a fan of any American President, right?), but I thank him and all of you who share these thoughts with him for these words!

I too am pleased that Belarus, Cuba and the other beleagured nations attracted President Bush's attention. But where were the issues that we are told so often lie close to the President's heart; namely, the moral issues?

As Robert Novak writes, "Bush's State of the Union was notable for what it did not contain. Having made a calculated decision to save his talk about economic issues for a separate speech next week, Bush mentioned only in passing the need to maintain his tax cuts as the bulwark of the economy. Bush completely ignored the social issues dear to much of his conservative base. He did not mention abortion on the day following the annual "March for Life" on the anniversary of the Roe v. Wade decision. He did not mention the embryonic research bill that he vetoed last year and is likely to veto again in the new Congress. He made no mention of same-sex marriage. Although exit polls show corruption was a major issue for voters in the 2006 elections, Bush ignored congressional ethics entirely. The closest he came to this issue was his call to halve the spending created by congressional earmarks -- the first time he had raised that problem."