The Missing Page of the State of the Union Speech 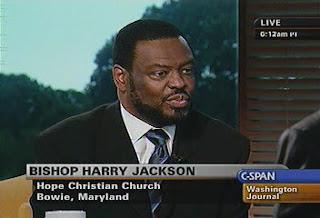 Last week’s State of the Union address was well-rehearsed, clear, and very cogent. Many believed it to be one of the president’s best efforts at oratory. Saturday’s Washington Times carried an article entitled, President's Union Speech Pleases Conservative Base. This article suggests that most conservatives feel as though the president’s tone and demeanor showed strength and resolve. They were comforted by the thought that the president is not going to abdicate his strong leadership role in the nation.

Unfortunately, evangelical Christians, who are one of the most loyal groups of the president’s supporters, feel just the opposite. They feel that President Bush has started to back away issues which he heroically championed just two years ago. Their concern with The State of the Union speech was not about what the president said. Their concern was focused upon what he did not say...

By the way, Rev. Jackson, a well-respected Maryland pastor, is founder and Chairman of the High Impact Leadership Coalition as well as author of The Warriors Heart: Rules of Engagement for the Spiritual War Zone.
Posted by DH at 2:48 PM