Blogs4Life and March for Life Pics 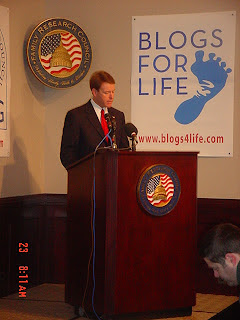 Yes, a picture is supposed to be worth a thousand words but then again, the old proverb (originally taken from a streetcar ad whose Chinese lettering actually meant "A picture's message can express ten thousand words") didn't take into account my lack of prowess with a camera...even the new faultless digital versions.

Nevertheless, because of the importance of the subjects involved here and the activities they were engaged in, I'll post these pics anyway. Fortunately, Matt took some too and I'll upload his later on to show you what things should look like!

The first photos show a few of the morning sessions of the Blogs4Life conference held at the Family Research Council headquarters.

At upper left is the FRC's dedicated and principled president, Tony Perkins. Tony admitted he didn't know very much about blogs until very recently but he encouraged the participants to use this technology (and everything else at our disposal) to tell our personal stories of how glorious and gracious is life. And he gave us a couple of neat examples to illustrate his point. 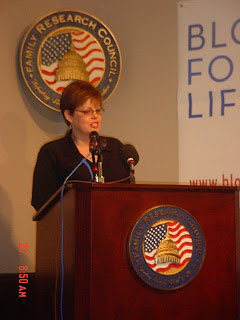 Jill Stanek gave a sparkling presentation that was part blog primer, part exhortation, and part mechanic. Very useful information and given with humor, human interest and passion. Bookmark her site for sure. 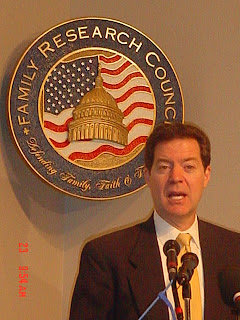 Senator Sam Brownback proved as personable and well-spoken as we figured he would be -- plus, his remarks about abortion, embryonic stem cell research, traditional marriage, faith, education, abstinence, pride in family, economic conservatism, history, and his recent decision to seek the Republican nomination for President were all of very sound stuff. As I've been suggesting for awhile now, I think Sam's the man. 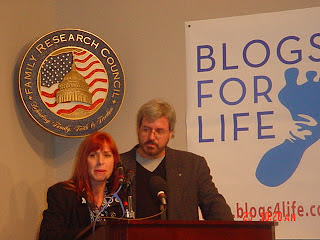 Filmmakers Jonathan and Deborah Flora had some very insightful comments about the MSM, surviving (and, more important, overcoming) the Hollywood atmosphere and ethos, the aching need for creative, patient involvement of pro-lifers in the arts, and more. 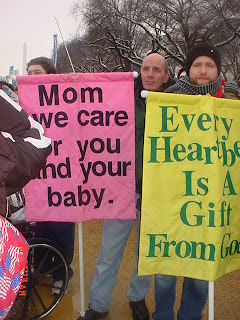 And then, following the morning at the FRC office, we headed over to the March for Life. At the left, you'll see Dick and Matt, bundled up and ready. Of course, as veteran members of the Vital Signs sidewalk counseling team, they know well the maxim taught by our pal, Ruth; namely, "There is no bad weather, only bad clothing." 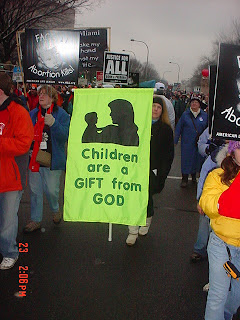 Claire, almost hidden in this shot, stands with our oldest pro-life banner. It was made for us some 15 years ago or so by our good friend and Vital Signs LifeSharer, Rita, who now lives with her husband in Florida. It is a great banner and, like our others, drew a lot of attention from our fellow Marchers. 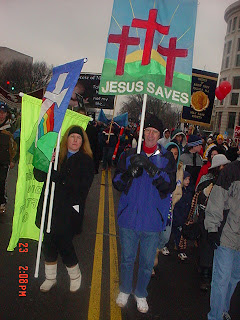 Claire struggles to hold my banner and her own while I ran ahead to try and get an in-process March for Life photo. Beside her is Quint. When speaking of veterans in pro-life activity of all kinds, these two are at the top of the list. 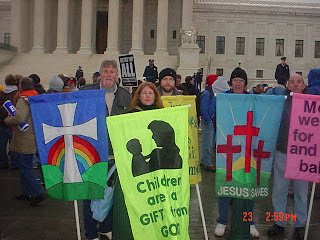 And, finally, here's a shot of the 5 tired, sore-footed but exhilarated Omaha pro-life activists at the end of the March near the steps of the Supreme Court where, in January 1985, I was once arrested and held two days (with two dozen other peaceful Christians) simply for praying. During part of the March, we had also enjoyed the presence of Lincolnites, Julie and her daughter, Annie. And, of course, we had splendid conversations along the way with people from Virginia, Kansas, Maryland, Missouri, Idaho, New York, Pennsylvania, Wisconsin, and several other states...and, oh yes, the country of Brazil too!
Posted by DH at 6:24 PM