What Has 2006 Shown Us About Religion in America?

For 25 years now George Barna has been conducting national public opinion surveys -- surveys that have drawn particular attention to the nation's changing religious values. His work, once hailed by nearly everyone in the religious communities, isn't quite so popular nowadays because Barna's honesty, candor and courage to plainly tell the truth about uncomfortable findings have caused some of his former friends to turn him off. It is a classic case of blaming the messenger rather than dealing with the message.

But George Barna, himself a conservative evangelical, is dedicated to bring the truth (however unexpected or distressing) to those who need to hear it and who can therefore use it to effect appropriate action. He is a very important "watchman on the wall" for America and, in particular, for the Church of Jesus Christ.

Each year, Barna underscores some of the most significant findings from his research of that year. If you would like to quickly review those results (or, since the site also has links to connect you to the original stories, if you would like to pursue them in greater detail), please go right here. And to encourage you, here's a few of the items Barna explores there:

* Three out of every four teenagers have engaged in at least one type of psychic or witchcraft-related activity...

* The notion of personal holiness has slipped out of the consciousness of the vast majority of Christians. While just 21% of adults consider themselves to be holy, by their own admission large numbers have no idea what “holiness” means and only one out of every three (35%) believe that God expects people to become holy...

*Most Americans have a period of time during their teen years when they are actively engaged in a church youth group. However, Barna’s tracking of young people showed that most of them had disengaged from organized religion during their twenties...

* Seven out of ten parents claim they are effective at developing the spiritual maturity of their children, but the Barna survey among 8-to-12-year-olds discovered that only one-third of them say a church has made “a positive difference” in their life; one-third contend that prayer is very important in their life; most of them would rather be popular than to do what is morally right. In fact, “tweeners” (those ages 8 to 12) deem their family to be vitally important in their life, but just 57% said they look forward to spending time with their family and only on 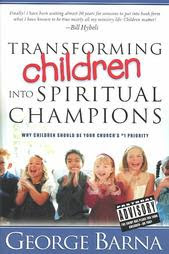 e out of every three say it is easy for them to talk to their parents about things that matter to them....

In addition, Barna shares information from his research about "Christian Revolutionaries", house churches, post 9/11 spirituality, the near invisibility of evangelical leadership, and more.

So do check out this important review. Once again, it is here.

And while you're at the site, you might want to scan the excellent resources available from the Barna group. They include leadership training, discussion guidelines, films and even books like the very impressive Transforming Children Into Spiritual Champions shown at left.
Posted by DH at 10:21 AM