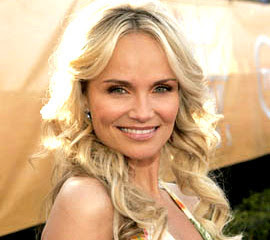 Kristin Chenoweth is a beautiful, talented and award-winning actress and singer who has won herself a huge audience of fans, including enthusiastic admirers among homosexuals (one of her film roles was a lesbian and Ms. Chenoweth has been outspoken about her support of same-sex marriage) and, ironically, among some Christians. The appeal to the latter group stems from her being raised as an evangelical, making an album of religious songs, and starring in several "family" productions with Disney, Sesame Street and several city symphonies. Indeed, the lady styles herself as a "liberal Christian," something the MSM is very interested in touting nowadays.

“God knows I’ve made mistakes and been criticized for them,” Ms. Chenoweth said unflinchingly...“When I was promoting ‘As I Am’ last year,” she said, “I went on ‘The 700 Club,’” Pat Robertson’s talk show on the Christian Broadcasting Network. “I wasn’t thinking about what it represents. I guess I was living in a little bit of a bubble, and I was surprised that it upset so many people. If I had it to do over again, I wouldn’t go, because I don’t agree with that antigay stuff. I don’t understand what the big deal is with gay marriage. Get over it, people. What if it was a sin to be short? Well, I guess it is in the Miss Oklahoma pageant.” (She was the runner-up in 1991.)

But when she assured her theater fans that she supports gay rights her Christian base was outraged; she was disinvited from performing at a Women of Faith conference in September 2005. She drew further criticism when she appeared in a parade of tiny bikinis in the March 2006 issue of FHM. Though even her parents were uncomfortable, she’s stopped apologizing.

“I’m a young woman, I like men, I’m not going to pretend to be what I’m not,” she said. “Anyway, I’ve finally graduated from the college of I Don’t Give a Hoot.” But “hoot” was not her first choice of words.
Posted by DH at 3:44 PM