At Work for Justice and Freedom: The Belarus Democracy Act Extended 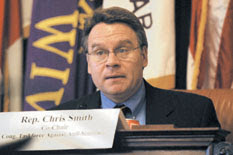 Said Rep. Chris Smith, the author of the bill, "As one who has worked for freedom in Belarus over many, many years, I remain deeply concerned that the Belarusian people continue to be subjected to the arbitrary and self-serving whims of a corrupt and antidemocratic regime headed by Alyaksandr Lukashenka."

The bill authorizes $27.5 million in funding for democracy-building activities in Belarus while also banning the U.S. government from providing financial assistance to Belarus, except for humanitarian aid, until Minsk conducts a thorough inquiry into the 1999-2000 disappearances of Lukashenka's opponents, releases political prisoners, drops charges against opposition figures, and ends the prosecution of independent media and pro-democracy organizations.
Posted by DH at 3:57 PM