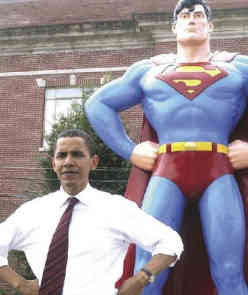 Kathleen Parker has a Town Hall column here in which she investigates the "rock star popularity" of Barack Obama. It is a piece with good information about Obama and his dramatic rise to prominence.

And, among other points she makes in the column, there is a most disturbing one about Obama's inroads into the Christian community, a matter I've been warning about in recent days, especially with Rev. Rick Warren's invitation to Obama to share his pulpit at Saddleback Church. Here's that paragraph...

While speaking recently to an evangelical audience gathered in Pastor Rick ``The Purpose Driven Life'' Warren's megachurch -- a water-parting event in itself -- Obama said that ``abstinence and fidelity, although the ideal, may not always be the reality. ... If condoms and potentially things like microbicides can prevent millions of deaths, then they should be made more widely available.'' He received a standing ovation.

By the way, an even more detailed, more hard-hitting look at Barack Obama can be found in next week's Human Events. But guess what? You can read that article (Barack Obama Is Just Another Liberal by Amanda B. Carpenter) right now by simply going right here!

Such service you get at Vital Signs Blog, right?