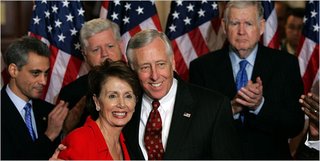 Tim Graham posted the following over on NewsBusters.org --

The man Democratic nominated for Majority Leader, Rep. Steny Hoyer, has a lifetime American Conservative Union rating of eight percent (zero percent in 2004, 12 percent in 2005). If you'd rather have the liberal rating, Americans for Democratic Action gave him a 100 in 2004, and a 95 in 2005. This should mean that any objective reporter would describe him as a "liberal." But here's the Friday Washington Post account of his selection, headlined "Political Pragmatism Carried Hoyer to the Top," by Shailagh Murray:

"Steny H. Hoyer is a practical moderate and Nancy Pelosi is a liberal idealist, and for more than 40 years they have competed like siblings, all the way to the pinnacle of politics."

(My Note: This NY Times photo above suggests John Murtha is none too happy with the decision of his colleagues.)